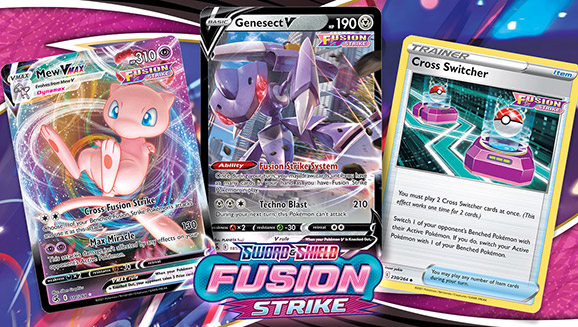 The latest expansion brings a new Battle Style to the party, plus plenty of other cards to improve decks.

Enter the battlefield in style and show off some cool new moves with cards from the Pokémon TCG: Sword & Shield—Fusion Strike expansion. This set introduces the new Fusion Strike Battle Style, which combines the power of Single Strike and the speed of Rapid Strike. And even as powerful new Fusion Strike decks emerge, the established Single Strike and Rapid Strike decks receive new resources to enhance their strategies and keep new foes in check. It will be thrilling to see how these Battle Styles duel against each other.

Let's take a look at some of the cards from Sword & Shield—Fusion Strike that are sure to add extra flair to your gameplay.


Unleash the power of Fusion Strike Pokémon with Mew VMAX 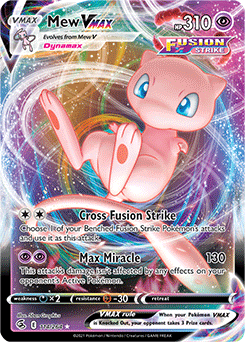 There might be no better Pokémon to usher in the Fusion Strike Battle Style than Mew VMAX. Like several of the Mew cards that have come before it, the power of Mew VMAX is dependent on the other Pokémon in play. If that sounds familiar, it's because Mewtwo & Mew-GX recently dominated tournaments using a similar strategy.

In this case, Mew VMAX's Cross Fusion Strike attack copies the attack of any Fusion Strike Pokémon on your Bench. This means that Mew VMAX can use attacks like Genesect V's Techno Blast, Meloetta's Melodious Echo, or Latias's Dyna Barrier for a cost of only 2 Energy of any type. It's a strategy that boasts a cheap attack cost and all-but-guaranteed success when you have access to Mew V's Energy Mix and the new Elesa's Sparkle Supporter card.

Of the cards that Mew VMAX can take advantage of, Latias deserves a closer look. Whenever a Mew VMAX is played, a Latias card is likely to be on hand. Latias's Dyna Barrier attack makes it immune to damage from Pokémon VMAX during the opponent's next turn. Many of the top decks rely on Pokémon VMAX to do damage and take Knock Outs, which makes Dyna Barrier a particularly useful attack for Mew VMAX to be able to copy. When challenged by an opponent's Dyna Barrier, Mew VMAX doesn't need to employ any tricks. Its Max Miracle attack ignores all effects on the opponent's Active Pokémon.

Gather your choice of Fusion Strike friends for Mew VMAX by using cards like Quick Ball, Capture Energy, and the new Supporter card Chili & Cilan & Cress. And remember: as more Fusion Strike Pokémon are revealed, more opportunities will arise for Mew VMAX to get involved in battle. 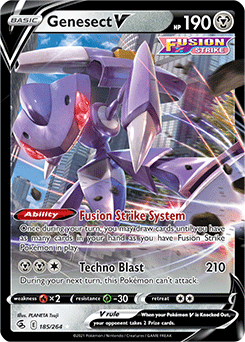 However, most of the excitement for this card is focused on its Ability. Fusion Strike System enables the player to draw cards until the number of cards they have in their hand is equal to the number of their Fusion Strike Pokémon in play. This Ability can be used once per turn for each Genesect V in play, which makes it possible to draw nearly half the deck in a single turn! This offers players even more resources to execute their winning strategies.

Given that Fusion Strike System can be used to draw cards, Genesect V does not need to be played alongside popular draw Supporter cards like Professor's Research and Marnie. This creates room in the deck to play Supporter cards that search for specific resources or disrupt the opponent, like Peony or Sidney.

Unlike with Supporter cards, players can play as many Item cards from their hand as they want every turn. Maximize the number of cards drawn through Fusion Strike System and advance your gameplay by filling decks with Item cards like Quick Ball and Metal Saucer, as well as the new Power Tablet, Cross Switcher, and Battle VIP Pass.

Despite all its strengths, Genesect V has a low HP compared to the Pokémon VMAX behemoths of the current metagame. Combining it with Fusion Strike Pokémon like Oricorio and Toxtricity can help to even the battlefield. Oricorio's Lesson in Zeal Ability reduces the amount of damage that Genesect V takes from attacks, while Toxtricity's Maximum Downer Ability reduces the HP of the opponent's Pokémon VMAX.


Master all the Battle Styles with Deoxys 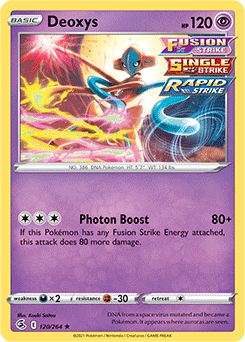 For players who are not content with using just one Battle Style, Deoxys is the way to go. Deoxys is a Single Strike, Rapid Strike, and Fusion Strike Pokémon—all at the same time! Importantly, the cost of its Photon Boost attack is satisfied by any 3 Energy. This means that just like the DNA Pokémon, a deck featuring Deoxys can take many forms.

For example, players can make good use of Deoxys in a Single Strike deck by using Houndoom's Single Strike Roar Ability to quickly power up Photon Boost. Alternatively, Deoxys can utilize the Rapid Strike Energy that is usually found in Rapid Strike decks. It can also be targeted by Elesa's Sparkle, which is likely to be found in a Fusion Strike deck.

Deoxys is also well-positioned to be at the center of a toolbox deck that splices together elements of each Battle Style. Don't be surprised to see a Single Strike Scroll of the Fanged Dragon pop up alongside a Rapid Strike Energy card or a Power Tablet card. To put a twist on an old saying—three strikes and your opponent is Knocked Out!

Deoxys does more damage to the opponent's Active Pokémon when it has a Fusion Strike Energy attached, so any deck featuring Deoxys should also include some of these new Special Energy cards. As a bonus, Fusion Strike Energy prevents all effects of the opponent's Pokémon's Abilities done to the Pokémon it is attached to. Keep this in mind whenever you're facing popular Pokémon like Inteleon VMAX or Umbreon VMAX across the battlefield.


Disrupt your opponent's flow with Gorebyss and Huntail 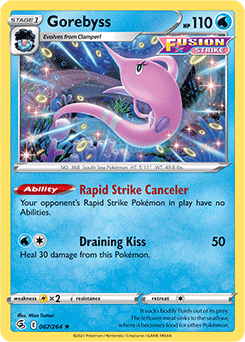 If you want your game plan to be executed swimmingly, sometimes you need to clamp down on your opponent's activities. Fortunately, Sword & Shield—Fusion Strike is awash with Water-type Pokémon that can do just that.

Huntail's Single Strike Jammer Ability makes it challenging for Single Strike Pokémon to attack. This Ability could even be enough to prevent Pokémon like Single Strike Urshifu VMAX from performing repeated attacks. It may also be an effective way to prevent the new Gengar VMAX from dominating decks that rely on Pokémon V and Pokémon VMAX.

Both Gorebyss and Huntail are Fusion Strike Pokémon, but that doesn't mean they can only be played in a Fusion Strike deck. Splashing these Pokémon into any of your decks can force your opponent to adjust their Battle Style.


Make some moves with Cross Switcher 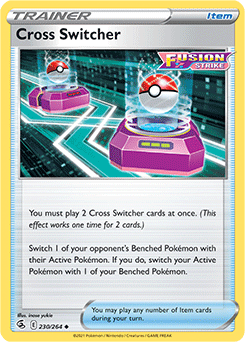 Don't get your wires crossed about Cross Switcher. This new Fusion Strike Item card creates a powerful effect, but only when played as a pair. Cross Switcher can change the momentum of a game by disrupting the opponent's strategy or enabling an important Knock Out. This card combines the effect of Guzma with elements of Custom Catcher. It could also be considered a combination of Boss's Orders and Switch. Whichever way you look at it, Cross Switcher is the epitome of a Fusion Strike card.

Many players are excited about the first effect of Cross Switcher. That's not surprising—cards like Boss's Orders and Lysandre have been played to great success in competitive play. What's more, Cross Switcher can elicit this effect without it being used as the one Supporter card for the turn. However, switching your own Active Pokémon with a Benched Pokémon can be just as useful. For example, it can remove the effect of Genesect V's Techno Blast attack without paying for the Retreat Cost.

Cross Switcher has a globally useful effect, so expect to see two or more copies of this card make its way into a variety of different decks. In particular, the card may play a starring role alongside the new Smeargle in a wall- or lock-style deck.

This is just a glimpse of some of the awesome Fusion Strike cards available in the new Sword & Shield—Fusion Strike expansion. With over 260 cards to collect, including new Single Strike and Rapid Strike Pokémon V as well as Pokémon VMAX, there are plenty of other exciting combinations and strategies to explore. The only thing left is to decide which Battle Style strikes your fancy!

Look for more Pokémon TCG strategy and analysis at Pokemon.com/Strategy.

Ellis Longhurst
Ellis Longhurst is a contributing writer covering Play! Pokémon events for Pokemon.com. She has been competing in high-level Pokémon TCG tournaments since 2006, and creating written content for the Pokémon community since 2011. Ellis now brings an Australian flavour to the Play! Pokémon broadcasting and stream teams at the International and World Championships.