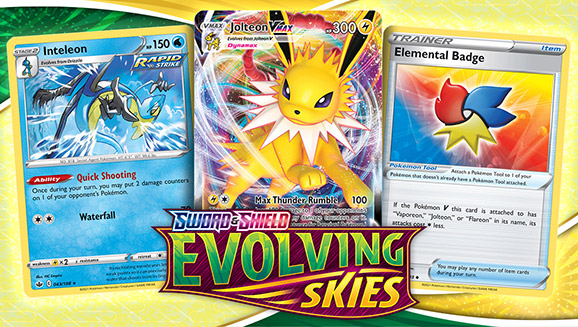 Eevee's Evolutions continue to shine with another quick and powerful deck. 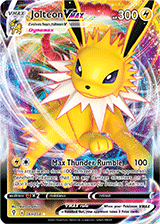 The Pokémon TCG: Sword & Shield—Evolving Skies expansion has another treat in store in the form of Jolteon VMAX. A recent article featured some of the other powerful Evolutions of Eevee and their Pokémon VMAX forms from this expansion, with Flareon, Umbreon, and Sylveon being the main attractions. But Jolteon VMAX is no slouch itself—it has quickly become one of the strongest and most popular decks in the Standard format. Read on to see how it works! 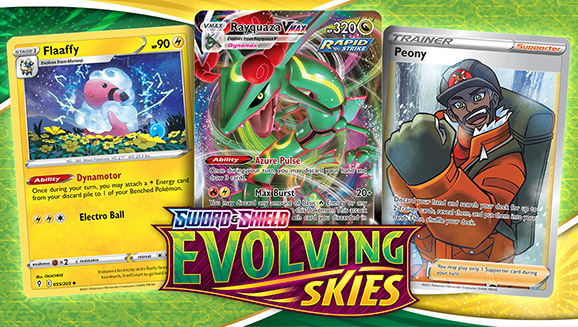 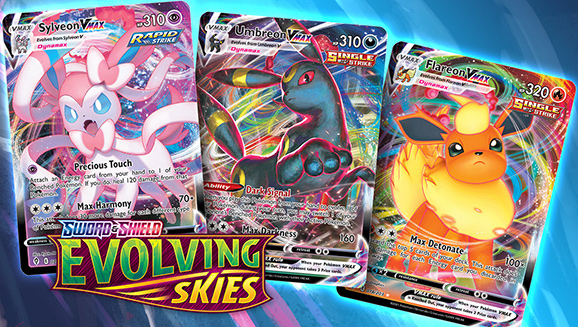 The Basics of Jolteon VMAX

Unsurprisingly, our example deck puts Jolteon VMAX in the spotlight for several good reasons. Before checking out its attack, let's look at its raw stats. For a Pokémon VMAX, 300 HP is on the lighter side compared to its counterparts (like Vaporeon VMAX and Flareon VMAX), but its free Retreat Cost makes up for these comparatively lower Hit Points. To make things even better, Jolteon V also has no Retreat Cost, despite being a Basic Pokémon. This is quite a valuable feature on a card and gives you a permanent pivot-Pokémon throughout the game. Combine this with Jolteon VMAX's attack, and this Pokémon line becomes one of the most flexible cards from the Sword & Shield—Evolving Skies expansion.

Jolteon VMAX's Max Thunder Rumble attack does 100 damage to the opponent's Active Pokémon for just 1 Lightning and 1 Colorless Energy. In addition, this attack will do a whopping 100 damage to an opposing Benched Pokémon that has any damage counters on it! With the rotation of Mew from the Sun & Moon—Unbroken Bonds expansion out of the Standard format, there is nothing left in the format to stop attacks from hitting the Bench anymore. To make sure you can use this attack for full value every turn, it's important that the deck has multiple ways of damaging the opponent's Benched Pokémon to set up Max Thunder Rumble. 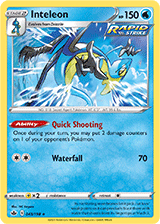 This deck takes advantage of the popular Inteleon consistency engine, giving you easy access to all Trainer cards thanks to the Shady Dealings Ability of Drizzile and Inteleon from the Sword & Shield expansion. But what really makes the Inteleon line a perfect fit for Jolteon VMAX is the Sword & Shield—Chilling Reign Inteleon and its Quick Shooting Ability. Thanks to Quick Shooting, you can damage a Pokémon of your choice every turn, making sure Max Thunder Rumble can reach its maximum potential.

Unfortunately, this Ability is featured on a Stage 2 Pokémon while the main attacker, Jolteon VMAX, could be ready to attack as early as the second turn, as it only needs to evolve once. Luckily, there is an easy solution to the problem in the form of Galarian Zigzagoon, also from the Sword & Shield expansion. Its Headbutt Tantrum Ability can put a damage counter on any Pokémon in play, allowing you to activate the snipe effect of Max Thunder Rumble effectively until you can set up an Inteleon with Quick Shooting. Galarian Zigzagoon will be easily accessible with the hefty amount of Quick Balls and Level Balls in the deck, but our example list still runs a second copy because of the importance of getting damage in play. It can be a real setback if you discover that your only copy of Galarian Zigzagoon is among your Prize cards; and having access to extra damage counters over the course of the game is never a bad idea. Remember that Scoop Up Net can be used to reset Headbutt Tantrum and let you dish out even more damage if needed. In addition, Scoop Up Net can also be used effectively by picking up a Shady Dealings Inteleon line to get additional uses out of them. 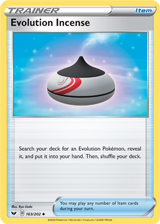 Pokémon Search: A good way to accompany the Inteleon line is by having lots of Pokémon search cards: Evolution Incense, Quick Ball, and Level Ball. With these cards, you'll be able to consistently search out multiple Sobble and ways to evolve them, resulting in a lot of Shady Dealings to openly access anything else you will need. Of course, these cards will also be great for finding Jolteon V and Jolteon VMAX early on, which you should look for in combination with Galarian Zigzagoon to activate Max Thunder Rumble. 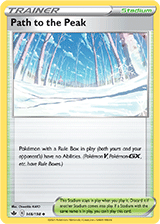 Stadiums: The Stadium card of choice is Path to the Peak. Since this deck takes advantage of the Inteleon engine and neither Jolteon V nor Jolteon VMAX has an Ability, there is nothing that Path of the Peak will block on your side of the field. But it can spell a ton of trouble for the opponent: One of the most notable Abilities this Stadium will turn off is Zamazenta V's Dauntless Shield Ability that prevents Pokémon VMAX from doing any damage to it. Turning off this Ability will be crucial and can make all the difference in turning a loss into a win. 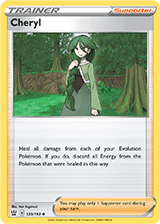 Supporters: Our list goes with the tried and tested Supporter lineup consisting of Professor's Research, Marnie, and Boss's Orders. These cards provide the deck with some of the strongest ways to draw cards in the Standard format, along with the best way to target the opponent's Benched Pokémon. I've also added a less common Supporter, Cheryl. This Supporter can be very situational, but it has the potential to change the outcome of the game drastically. When played, Cheryl will heal all damage counters from all your Evolution Pokémon for the cost of the Energy attached to them. Since Jolteon VMAX needs 2 Energy to use its attack, this might seem like a problem. Luckily, there is an incredible Tool that can help you out... 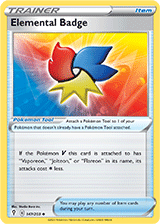 Tools: In Sword & Shield—Evolving Skies, all of Eevee's Evolutions get their own corresponding powerful Pokémon Tool card, with Jolteon getting Elemental Badge. When attached, it enables Jolteon V and Jolteon VMAX to attack for one less Colorless Energy, meaning a single Lightning Energy is all you need to unleash the Max Thunder Rumble attack. Cheryl now becomes much easier to use, as you only need to attach a single Energy card from the hand to fuel the attack once again after healing.

The Elemental Badge also lets you spend the first turn of the game using Sobble's Keep Calling attack to fill up the Bench. This is important if you happen to go second in the game, as you don't have any other great attacks to use on the first turn. Jolteon V having free Retreat Cost also makes it easier to get Sobble into the Active Spot to use its attack. 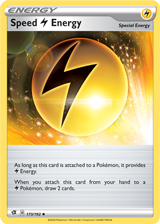 Energy: With the use of Elemental Badge, this deck does not need to run many Energy but it's still important to be able to find them at the right time. Speed Lightning Energy is an excellent Energy to help you draw extra cards, and a couple of Capture Energy will provide more ways to find Jolteon V on the first turn. There are also a few Basic Energy included, which can be retrieved by Energy Search. The inclusion of Energy Search lets Shady Dealings access Lightning Energy when needed, which dramatically increases the deck's chances of finding that crucial Energy attachment.

Given the choice, you should always elect to go first with this deck, as Jolteon VMAX does not need an impressive setup to start dishing out massive damage. On the first turn of the game, you will have one very clear goal: get Jolteon V into play. This is crucial so you can start attacking on the second turn and begin applying pressure. Missing Jolteon V on the first turn can result in the game snowballing out of your control fast, and in the worst case, your Jolteon V will be sniped immediately when it does hit the Bench later.

Even if you go second, there are a couple good options you can utilize to execute your strategy. As previously mentioned, using Keep Calling is a great way to kickstart your setup, as Jolteon VMAX will be able to attack on the following turn thanks to the Elemental Badge. However, Jolteon V's first Thunder Spear attack could also be something to consider, as its 20 damage to any target provides an excellent setup for Jolteon VMAX's Max Thunder Rumble. Thunder Spear can work as a substitute for Galarian Zigzagoon. However, keep in mind that most of the time Sobble's Keep Calling attack will still be the better option (if available). 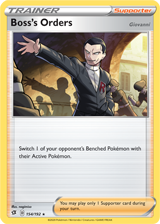 In my opinion, the biggest advantage this deck has is its flexibility in placing damage counters in the most effective way possible. In the current metagame, no matter what your opponent is doing, getting six Prize cards should be manageable with only three Max Thunder Rumble attacks. One of the most common ways for you to draw all your Prize cards is to focus solely on two Pokémon VMAX. Most of them have a range of 300–340 HP, meaning that with a few Headbutt Tantrum and Quick Shooting Abilities, you will be able to do the extra damage needed to take them down.

You should also not be afraid to target a Benched Pokémon V before it evolves into a Pokémon VMAX either. This will often put pressure on your opponent's main attackers. And should the opponent choose not to evolve the Pokémon V, you can often target a single-Prize Pokémon for the last Prize card instead. Focusing on your opponent's attackers instead of their support Pokémon also makes it more difficult for your opponent to attack with an undamaged target in the late game. This could be a huge deal, as it takes the pressure off of you to find a Boss's Orders.

Also, don't forget that Inteleon has Weakness to Lightning-type Pokémon; you can use that to your advantage when playing against other decks featuring the Inteleon engine.


How to Beat Jolteon VMAX

Another way to overcome this powerful Lightning-type deck is to take advantage of its predictable nature. If you're playing a deck that can also run Cheryl, you could completely wipe off a turn or two of attacks and effort from the Jolteon VMAX player.

My final tip is to be careful with every Pokémon you put on the Bench when playing against Jolteon VMAX. With some clever Bench management, you could force the Jolteon VMAX player to attack less critical targets and gain the upper hand.

Without a doubt, Jolteon VMAX featuring the Inteleon engine is one of the most consistent decks in the current Standard format. Its glaring Fighting-type Weakness keeps it somewhat in check, but otherwise the deck has an excellent game plan it can execute without much trouble, game after game. I highly recommend giving Jolteon VMAX a try if you haven't already. The deck is almost guaranteed to bring you a ton of fun and some speedy games.

And be sure to check out Pokemon.com/Strategy for more Pokémon TCG strategy and analysis. 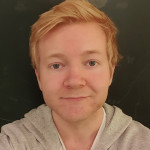 Tord Reklev
Tord Reklev is a contributing writer for Pokemon.com. He is a longtime player from Norway, playing the game since he was 6 years old. He is notable for being the only Masters Division player to win the North America, Europe, and Oceania Internationals, and he recently made Top 4 at the World Championships. Outside of the game, he is a student and enjoys playing tennis. You can find him at most big events, and can follow him on Twitter at @TordReklev.