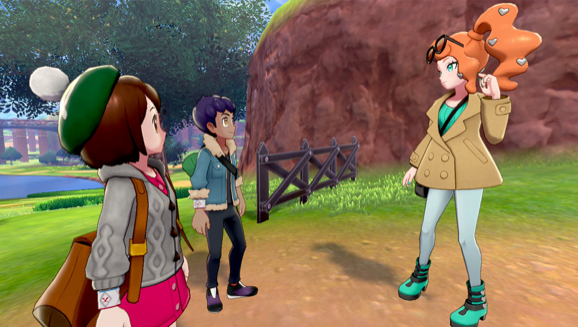 Look back on some of the best bits—both big and small—that can be experienced in Pokémon Sword and Pokémon Shield.

We've been journeying through the world of Pokémon for some time now, and with the celebration of 25 years of Pokémon under way, this seems like a great time to revisit some of the many regions that we've ventured to over the years. The first stop is the recently visited Galar region, which debuted in Pokémon Sword and Pokémon Shield. Join us as we look back at some of the most memorable moments of the Galar adventure.

The Call of the Wild Area 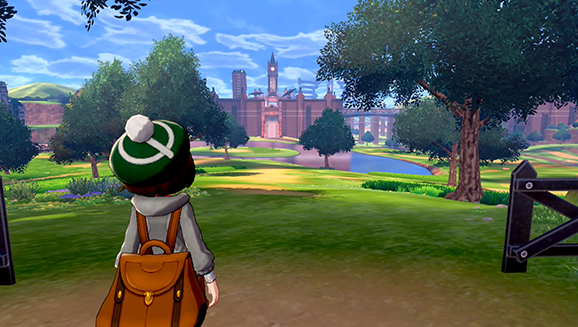 One of the Galar region's most notable sights, the wide-open Wild Area is unlike anything we've seen in a Pokémon game before. Taking our first steps into this vast stretch of land instantly filled us with a sense of wonder—so many places to explore, so many patches of tall grass, so many large Pokémon freely wandering around, so many different types of weather to navigate, so many Pokémon Dens shooting pillars of light into the sky.

It's almost a little too much to take in at once, and progressing further in the game reveals the Wild Area is even larger than it first appears. Longtime Pokémon fans might have a chuckle when crossing the bridge at the Motostoke Riverbank: there's often a Snorlax hanging out nearby in what appears to be an homage to the Sleeping Pokémon's tendency to block bridges with its considerable girth.

With so much to see and do, it's no surprise that players will return to the Wild Area several times during their quest.

Pokémon Gym battles are always thrilling, but the excitement levels went through the roof when we took on our first match in the Galar region's Turffield Stadium. After a dramatic walk down a hallway into the open arena, we were greeted by bright stadium lights, a roaring crowd, and a cascade of camera flashes from the stands. When Milo strode out to face us, we got the feeling that we were in for an epic battle.

Our suspicions were confirmed once the action started and the intense, pulsating music began. Things reached a fever pitch, though, when Milo Dynamaxed his Pokémon and we responded in kind. The crowd began to chant along with the music as the Pokémon on the field grew to monstrous sizes. Seeing the Pokémon towering over their Trainers and the crowd showed just how massive this battle was.

Yes, we've taken on many Gym battles during these past 25 years, but in the Galar region, they feel like events. 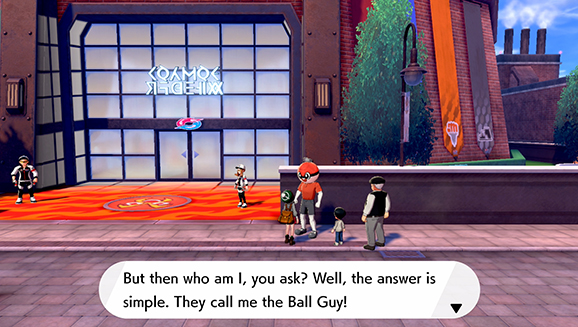 During our travels through the Galar region, we met plenty of people. From titans of industry (like Chairman Rose) to famous Gym Leaders to simple fishers, the people of Galar are many and diverse. However, perhaps no citizen is more memorable than the enigmatic Ball Guy. With a surprisingly fit physique and a costume that has a large, bulbous head shaped like a Poké Ball, this cheerful character can be found near the game's multiple stadiums. Quite the sphere of influence!

Ball Guy is always ready with some words of encouragement and a special gift—usually a scarce variety of Poké Ball. Nobody knows Ball Guy's true identity or intentions, but it's hard to argue with the enthusiasm and generosity that Ball Guy displays.

Each odd encounter with this well-rounded mascot left us scratching our heads, but that's kind of the point, isn't it?


This Mustard Is Spicy

When we arrived on the Isle of Armor via the Pokémon Sword Expansion Pass or the Pokémon Shield Expansion Pass, we met the Dojo Master, Mustard. This former Galar region Champion has since retired and now spends his days teaching others about the ways of Pokémon battling. After we met the elderly Pokémon Trainer, he took us on as students, tasking us to perform three trials to prove our worthiness.

After we completed the trials, Mustard rewarded our efforts by gifting us a Kubfu. We could then evolve the tiny Legendary Pokémon by winning a series of battles in either the Tower of Waters or the Tower of Darkness. No matter which gauntlet we chose, though, the final opponent would be Mustard himself. As we stepped out to face him, it would have been easy to become overconfident based on the old man's appearance. He may seem well past his prime, and his cozy sweat suit gives him a relaxed look, but there's a reason he's still called “Master.”

In a dramatic turn, his cheerful grin melted away, a determined look furrowed his brow, and he tossed aside his casual clothes to reveal an outfit worthy of a martial arts master. And jeez, for an old dude, Mustard is cut. Forget Pokémon battles—Mustard looks like he could stop a charging Copperajah with his bare hands. The sudden shift in Mustard's character is equal parts humorous and intimidating, making this battle truly memorable.

The Crown Tundra is the second half of the Pokémon Sword Expansion Pass and the Pokémon Shield Expansion Pass, and in it, we encountered all sorts of Legendary Pokémon from throughout the Pokémon series' history. But we weren't necessarily prepared for when we approached the large tree on Dyna Tree Hill. As we got close, we witnessed the Galarian forms of Articuno, Zapdos, and Moltres having a... Let's say they were having a “disagreement.” The three Legendary Pokémon engaged in a brief yet action-packed battle until they were distracted by the sound of our Rotom Phone. This broke them out of their squabble and sent them heading off in three different directions.

Getting to see Pokémon—especially powerful Legendary Pokémon—interact with each other in the wild without human interference is a rare treat, and this little tiff (if something filled with fiery blasts and beams of psychic energy can be called a “little tiff”) left us yearning for more. Their interrupted battle serves a purpose, too. After the trio flees, players can then track them down throughout the Galar region in hopes of catching them. 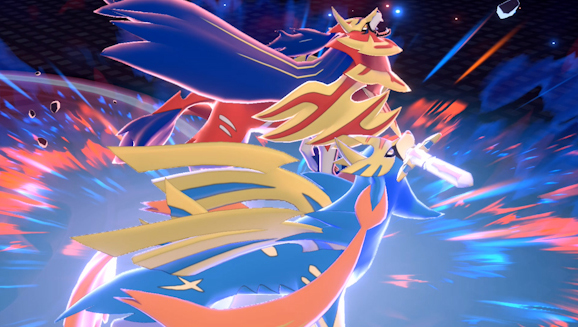 Those are certainly some very memorable moments from the Galar region, but there were a couple of other cool experiences that we just couldn't let go without a mention. After all, who can forget the dramatic appearance of the Legendary Pokémon Zacian and Zamazenta as they arrived just in the nick of time to assist in the battle against the powered-up Eternamax Eternatus? It's an inspiring moment that should get any fan cheering.

And the imposing scale of large Pokémon is seldom shown as effectively as it was when we first arrived on the Isle of Armor and glanced out into the ocean to discover a gigantic Wailord looming on the horizon. And yes, players can ride their Rotom Bike out to the Float Whale Pokémon for a close encounter.

This is just the beginning of our tour back through the world of Pokémon's many regions. Check back soon—we'll be heading for the Alola region as we continue to celebrate 25 years of Pokémon!