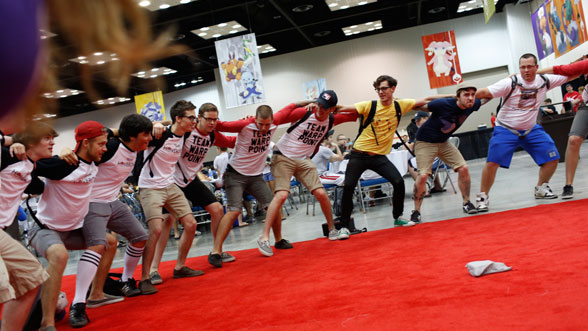 The Pokémon Company International has established the Play! Pokémon program to encourage Pokémon players of all ages to find casual and competitive play opportunities. Initially created to give Pokémon Trading Card Game players the chance to meet up, Play! Pokémon has expanded to include video game activities, as well as general nongaming activities, such as Pokémon movie viewings and art sessions. Casual League events, tournaments, and larger competitions such as the International and World Championships give players the chance to compete, test strategies, trade Pokémon and cards, and make new friends who share a common interest in Pokémon.

The core goal of the Play! Pokémon program is to provide a fun, organized playing environment where kids can grow socially and intellectually. Within the Play! Pokémon environment, an emphasis is placed on fun, fairness, honesty, respect, sportsmanship, and learning. In addition to promoting logical and strategic thinking, good sportsmanship, and core math and reading skills, the game's popularity has often led to parents and their children playing in the same events.

Play! Pokémon supports both noncompetitive and competitive play through League and Championship Series competitions. Pokémon Leagues are played in a casual setting, and League members are rewarded for playing games—win or lose. Pokémon Leagues are held in public locations, such as game stores, community centers, or libraries, and are run by Independent Organizers who have applied for and received certification as Organizer-certified Professors. Find a League near you.

Whether you are attending a casual or competitive events, Pokémon sanctioned events are organized and judged by individuals we call Professors. Professors can be certified Tournament Organizers or League Leaders, or they can be certified judges who serve as referees for the Pokémon Trading Card Game or video game matches. Some Professors are certified to hold multiple roles.


Leagues & Tournaments: What to Expect

Players who wish to participate in Play! Pokémon tournaments and Leagues are required to have a Player ID, which is used to report their attendance at these events. Most Tournament Organizers and League Leaders can provide a Player ID on site for players who do not already have one. Players who choose to participate in the ratings and rankings system are required to sign up for a Pokémon Trainer Club account at Pokemon.com and consent to participate on the Play! Pokémon profile page. Players must also remain in good standing within the Play! Pokémon program. Younger players will need parental consent to complete the sign-up process.

Participants in Pokémon TCG events often trade cards with other players. This is encouraged, but we do suggest talking to your children about the potential consequences of trading real items. Professors are often a good resource for trading tips.

Parents of minors: Please remember that Tournament Organizers are often store owners and have a business to run as well as the tournament. Parents should remain on site to keep track of their children and, of course, celebrate their play. Tournaments usually take several hours, so parents might want to bring a book or some other quiet activity to occupy their time. We encourage parents to build a deck and join the fun!


What Your Child Can Expect

Due to the competitive element in tournaments, we recommend that parents discuss issues of winning and losing, pressures of competition, and good sportsmanship with their children. It is important to be a good sport—win or lose. The Pokémon Company International believes that children should have fun in the process of competing, regardless of the outcome. It is, after all, just a game.

We suggest that players arrive early to ensure that the organizer has time to answer any questions before the tournament. You are also encouraged to contact the Tournament Organizer via email if you have any questions or concerns. Their email address can be found on the event listing in the Event Locator.

It is also important that players understand their responsibilities in preparing for the event. For the Pokémon TCG, players will need a legal deck built to meet the regulations for that event—the format will be provided well in advance by the Tournament Organizer and noted on the Play! Pokémon website. If a child is new to the game, or new to tournaments, it's a good idea to have the event judge look over the deck prior to the event. While the legality of the deck is ultimately the player's responsibility, judges will typically help check legality as it will help ensure a pleasant experience. For the Pokémon video games, players will need to bring their own video game (such as Pokémon Sun and Pokémon Moon) and a system in the Nintendo 3DS family. Once again, the Tournament Organizer will be able to advise the players on tournament rules and restrictions in advance via the Play! Pokémon website.

It is very important that players listen to Organizers and judges when they explain how to play in the event. These Professors will outline important points, such as how to report the match results and how to ask for a ruling, at the beginning of the tournament. Players should understand that, even if they are familiar with this information, they need to listen and avoid being disruptive. Talking or other disruptive behavior during the delivery of these instructions is impolite. All players should have the same opportunity to learn and understand the rules of play prior to an event.

Parents have responsibilities at events, as well. It is important that participants are allowed to play at their own pace. Players are learning to concentrate on complex strategies and concepts, which can sometimes be frustrating. Also, a match should not be interrupted while in progress. If you, as a parent, have a question about anything, ask a Professor away from the match.

We understand that parents get excited and often want to help their children do well. Please remember, coaching during a match is not allowed. If you would like to talk to your child about strategies, sportsmanship, or anything else, please refrain from doing so during a match. You might be surprised that, although it is a competition, players will provide advice and play tips between matches. So, even if you think your child missed something or misplayed, their opponent may point this out before you even get a chance.

By simply following these few guidelines, parents can help ensure that their child has a fun and exciting experience participating in Pokémon Leagues and tournaments! If you have any further questions, feel free to contact us at support.pokemon.com.


*These events will not resume for the 2022 Season. We look forward to sharing more information on these events with the community in the future.